In September 2020, my 4th book published by a publisher (6th overall) came out. It’s called HTML and CSS: Visual QuickStart Guide and it’s a (very) beginner’s guide to learning HTML and CSS. The process was long and at times frustrating. I wanted to go through how I wrote it, from inception to hitting the shelved.

Michelle Frechette knows a thing or two about building a community. Not only does she do it for multiple WordPress business, but she’s cultivated quite the community on Twitter! As someone who’s trying to grow my own community, I had lots of questions for Michelle and she generously answered them all. Learn all about what it takes to grow a community today. Plus in Build Something More, how to help those underrepresented in your community.

Finding time as a busy creator or small business owner can be tough. But what about being a single mom, running a content business, in a competitive space, and making money doing? That’s exactly what Christine Pittman does, running her hugely successfully cooking blogs and podcasts. Tune in to get tips about starting, staying consistent, making money, and the important role analytics plays in all of it. Plus, in Build Something More, we talk about what it’s like cooking for our kids as business-running parents.

Sponsored by: Bryce Adams is creator of one of my favorite tools, Metorik. Bryce tells us about the path the led him to making Metorik, his view on e-commerce, GDPR, and how he’s using some cutting edge tools. We also talk engagement and stats. Be sure to stick around until the end of the episode…

How I Built It
My 2022 Yearly Theme: The Year of Retreat 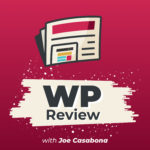 WP Review
WordPress 5.6 is Out!