Jay Gibb is the founder and CEO of CloudSponge – a B2B SaaS company that sells an address book widget. We talked about growing an audience, research good opportunities for building a product, and Jay gives some fantastic advice for cold outreach. 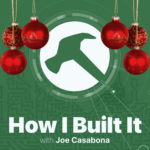 How I Built It
Generosity and the Future: My Favorite Christmas Story

I knew from a young age, I wanted to play the drums. I got my first small kit when I was five and when my friends and I started a band, heavy quotes, I played paint buckets. When I was 15 years old, I knew I needed a real kit. It’s the last episode of…

Grow your audience. Get leads. Sell your thing. Make money. This seems to be the formula for creators…but these are just nebulous ideas. How do we actually implement them? That’s what today’s guest, Anna Tutckaia, is here to talk about. She’s the Head of Marketing at ManyChat, and she’ll tell us all about how we can find leads by learning about our audience, how their virtual event garnered thousands of potential customers and helpful tools for personalization. In Build Something More, we answer the question, “Should you really move from Facebook to Circle?”

Sponsored by:Podcast Movement is a giant podcast conference and expo where 3,000 attendees come from all over the world to talk podcasting. It’s 4 days of events, talks, and networking opportunities. If you’re never, been, I recommend it. I had a few goals going into the conference, and as a result I had some pretty…

Molly Keyser made half-a-million dollars selling a 15-page, $59 eBook without spending money on ads. How do you ask? She created something SUPER valuable, that immediately made the buyer money. And throughout this episode, Molly is going to tell us how she went from professional photographer to online educator making digital products, all by knowing and serving her niche. There’s A LOT to unpack, and I know you’ll find a lot of actionable tips here.

Sponsored by:Rachel Cherry is a front end developer and lead organizer of WPCampus, a WordPress conference focused on Higher Education. In this episode, we talk about what goes into putting on this conference, from scouting a location to day-of logistics. Show Notes Rachel Cherry WPCampus Chris Lema on How I Built It Liam Dempsey on…

Word of Mouth has long ruled the lead-generating roost for freelancers and small business owners. But that’s an untenable, unscalable business model. What *does* work, you wonder? Ask web designer Jess Freeman. 60% of Jess’ leads come from content creation alone; 40% from her blog and YouTube. While many view YouTube as a place for entertainment and influencers where only the most popular channels make money, Jess shows us that’s not true. And she shares some fantastic tips on how you can leverage YouTube to build trust and generate leads. Plus, in Build Something More, we talk WordPress vs. Squarespace.